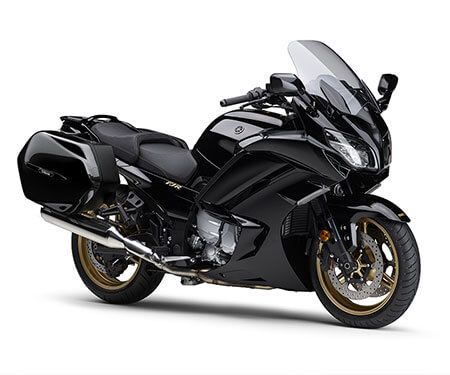 It’s been 20 years since Yamaha defined the sports touring concept with the introduction of the FJR1300. Its glass smooth four cylinder engine and ability to devour huge distances in supreme comfort has built up a cult like status among owners.
With its silky smooth 1298cc inline four engine, a smooth and quiet helical cut six speed transmission, lightweight assist and slipper clutch, lean angle sensitive LED lighting system, long-range 25-litre fuel tank, aerodynamic fairing with electronically adjustable screen and adjustable riding position, the FJR1300AE gets you there in comfort and style.
And to highlight 20 years of FJR1300, this 20th anniversary edition comes with gold wheels, commemorative tank emblem, blacked out levers, handlebars and fuel cap – and a special stitched seat including embossed logo.

Rideaway Price
$ 32649
Ride away price is based on the manufacturer's recommended retail price (MRRP) for a private buyer, 12 months registration, 12 months CTP, stamp duty and recommended dealer delivery fee. For non-road registerable models, ready to ride price includes the MRRP and dealer delivery fee. Actual ride away / ready to ride price may differ depending on choice of dealer and individual circumstances. Contact your local Yamaha dealer to confirm pricing. Yamaha reserves the right to vary the ride away / ready to ride price at any time.
Secure yours today 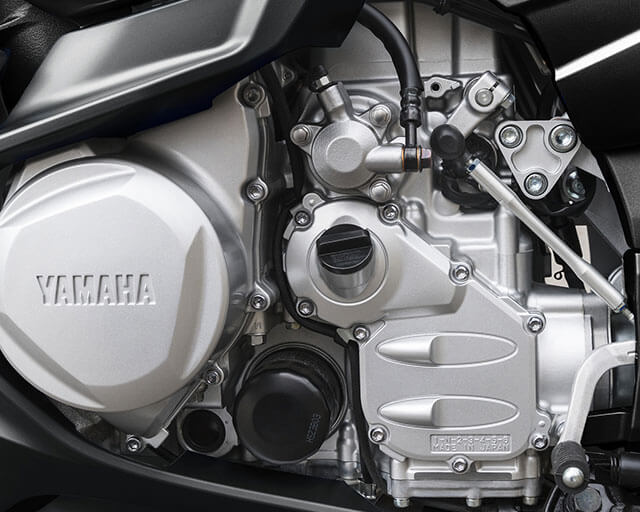 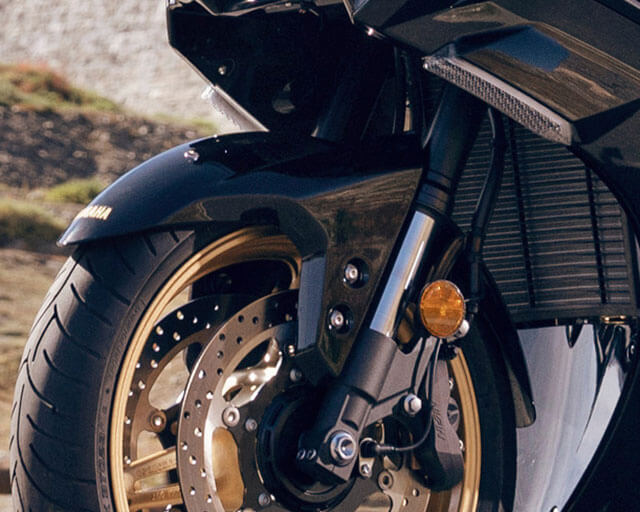 By simply selecting an option via the easily located handlebar-mounted switch, the rider can select ‘One-Up', ‘One-Up with Luggage', ‘Two-Up' or ‘Two-Up with Luggage' suspension settings. In addition to these four main settings, the system also offers the rider a choice of ‘Soft', ‘Standard' or ‘Hard' damping for each setting, giving a total of 12 pre-defined suspension set-up options. 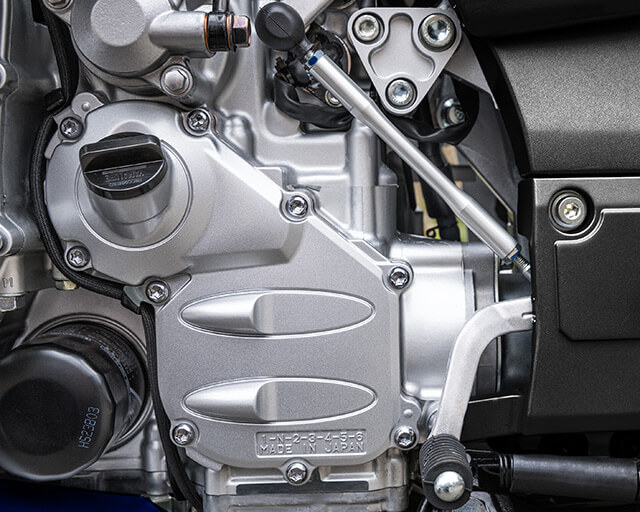 The FJR1300AE is equipped with a 6-speed transmission that enables the rider to make optimal use of the massive reserves of torque for rapid acceleration - while the high 6th gear gives lower rpm at high cruising speeds. And for smoother downshifting and enjoyable cornering, a standard Assist and Slipper (AS) clutch is fitted. 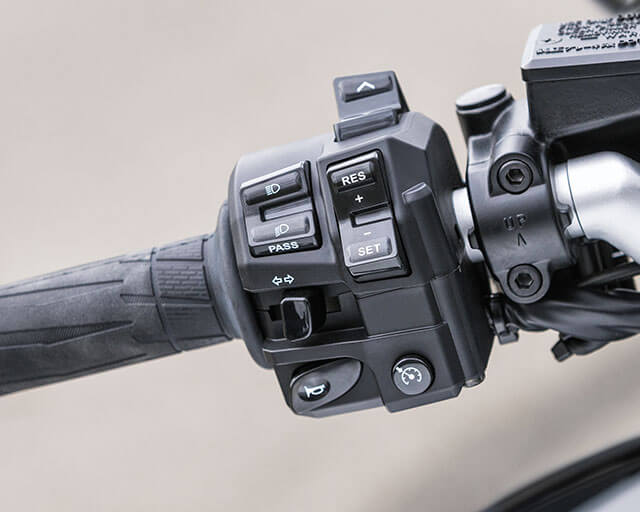 The FJR1300AE benefits from a new easy-to-operate cruise control system, which has been designed to make long-distance touring more relaxing and enjoyable. The system functions in 3rd, 4th and 5th gears between 50 km/h and 180 km/h, and is operated by two switches located on the left handlebar assembly. 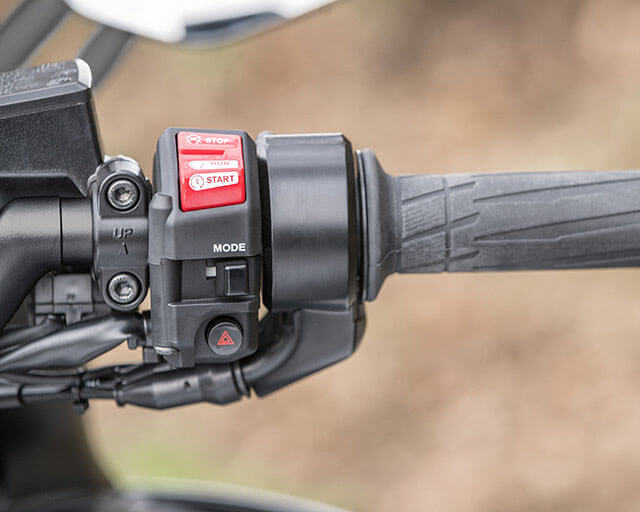 Yamaha D-MODE offers the rider a choice of two running modes, identified as 'T' mode and 'S' mode, which are operated by a push switch on the right handlebar. The system changes the character of the engine performance by adjusting the throttle valve in the Yamaha Chip Controlled Throttle (YCC-T). 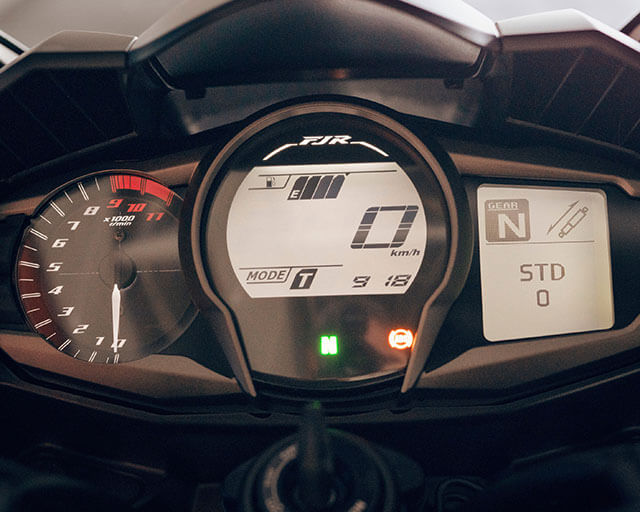 This electronic system uses sensors to detect any rear wheel spin, and as soon as the rear tyre loses traction the Traction Control System instantaneously adjusts the bike's ignition timing, as well as the fuel injection volume and throttle opening to momentarily cut drive, and ensure that traction is maintained. 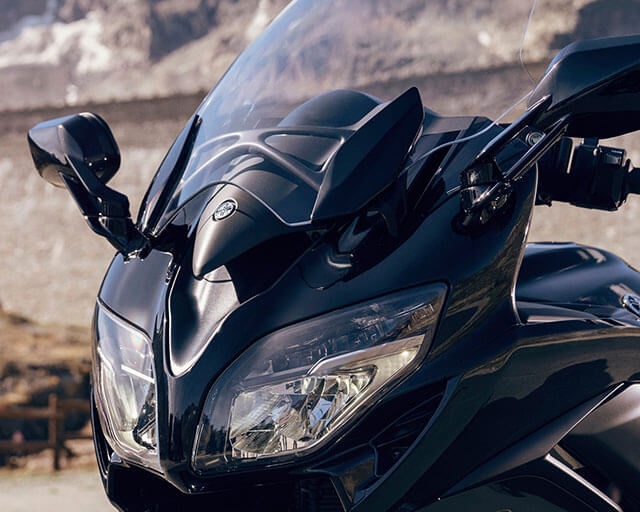 Twin-eye headlights are equipped with four compact and powerful LED lighting units - while the LED position lights and LED taillight assembly underline the FJR's high-tech specification. And with its front adaptive cornering lights that illuminate as the bike banks over, the FJR1300AE is one of the most capable bikes in its class. 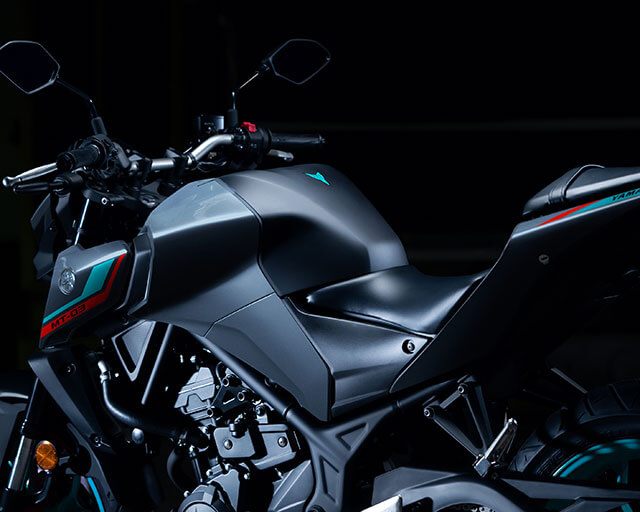 The MT-03's ergonomic handlebar / seat / footrest layout is designed to give an upright riding position that makes this one of the most comfortable and versatile bikes in its class. 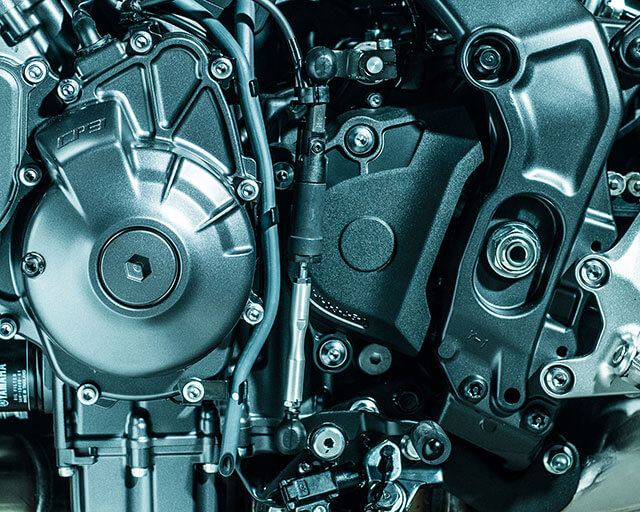 For ultimate acceleration the MT-09 gets a Quick Shift System (QSS) that ensures seamless and clutchless full-throttle upshifts and smooth downshifts. Together with the A&S clutch, this electronic aid transforms the riding experience and enables the rider to optimise the increased torque levels for more thrilling acceleration as well as higher levels of chassis stability and control when downshifting.